Incline dumbbell flys works the pectoral major. Set the bench to an angle of 30-60 degrees. Under 30 degrees is a flat dumbbell fly, and over 60 is a shoulder press.

Holding a dumbbell in each hand with palms facing each other, lie on your back on an inclined bench with your feet placed firmly (on the floor or the bench) so that you can keep your spine in a neutral position. Pull your shoulder blades down and back, making firm contact with the bench. Your head, shoulders, and butt should make contact with the bench throughout the exercise.

Press the dumbbells to a position shoulder-width apart with your elbows slight bent. Keep the wrist in neutral position. Do not bend the wrists.

Inhale and slowly lower the dumbbells in a wide arc until they are level with your shoulders. Keep the dumbbells parallel with each other during the movement.

Exhale and slowly return to starting position in the same wide arc pattern.

The incline dumbbell bench press is a great exercise for building mass on the upper chest.

Sit on an incline bench angled between 45 and 60 degrees,  grasping a dumbbell in each hand at the top of your thighs.

Then, use your thighs to help push the dumbbells up, as you lay back on the bench.

Your feet should be firmly on the floor, a raised platform, or on the bench in order to allow your spine to be in a neutral position. Pull your shoulder blades down and back so that they make firm contact with the bench.

Press the dumbbells to a position over your eyes or slightly higher, with your elbows straight. Wrists should be in a neutral position and palms facing forward.

Inhale and lower the dumbbells toward your upper chest, but slightly wider toward the armpits. Gently touch the dumbbells to your chest. Keep the elbows under the wrists and the wrists in a neutral position. Performing the exercise with the elbows close to your torso emphasizes more triceps. Performing the exercise with the elbows flared out from the body emphasizes more pectorals. Maintain all points of contact with the bench and keep your feet firmly on the floor throughout the exercise.

Exhale and gently press upwards to full elbow extension with the dumbbells over your eyes. Maintain your points of contact with the bench and floor. Do not allow your back to arch. Keep the wrists in a neutral position throughout the movement.

One of the most fundamental exercises on earth. Treat the push-up with respect, and it’ll be a friend for life :)

Come to plank position. Engage the abdominals and pull the shoulder blades down your back. Your head should be aligned with your spine. Your feet are together.

Inhale and slowly bend the elbows, lowering your body toward the floor. Keep the torso engaged and the head aligned with your spine. Do not allow your lower back or ribcage to sag or your hips to hike upward.

To maintain stability also, engage your butt (glutes) and thigh (quadriceps) muscles. Try to lower yourself until your chest or chin touch the mat or floor.
Exhale and press upward through your arms, straightening the elbows. Imagine pushing the floor away from you.

This is an essential exercise for beginners. Some people can´t do a single push up. It´s not a myth, I´ve trained some. This is an easy variation to  gain strength and progress to the full Push Up if you add it to your routine.

On the floor on your knees supported by your hands in front of you.

Slowly bend your elbows to where your chest touches or barely touches, the ground.

Keeping the torso rigid and head aligned with your spine, inhale down, exhale up! 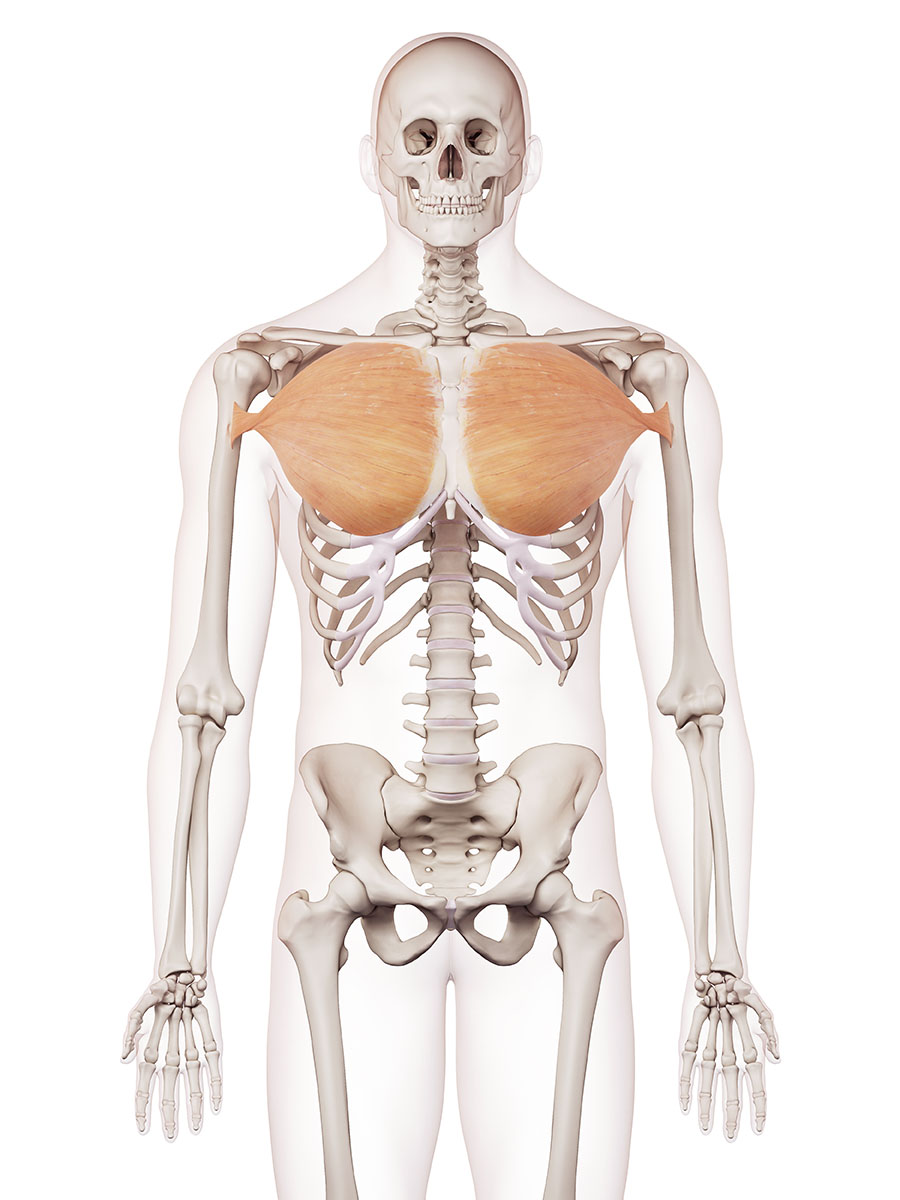 The pectoralis major makes up the bulk of the chest muscles in the male and lies under the breast in the female.

Pain and symptoms associated with the Pectoralis Major muscle
– Chest pain
– Pain in the front of the shoulder
– Pain in the inner arm, inner elbow traveling down to the into the middle and ring fingers
– Breast pain
– Upper back pain between and around the shoulder blades
– Pain when trying to reach behind the body
– Rounded shoulder posture
– Contributor to forward head posture
Activities that cause pain and symptoms of the pectoralis major muscle
– Lifting heavy objects
– Working with your arms out in front of you (computer)
– Driving and horseback riding: both require you to hold your arms up and in front of your body
– Keeping your shoulders rolled forward or pulled up
– Slouching
– Carrying a heavy purse or backpack on one shoulder
– Large breasts

Medial aspect of the coracoid process of the scapula.

Pain and symptoms associated with the Pectoralis Minor muscle
– Chest pain
– Burning and stabbing like pain in the pectoral (chest) area
– Pain in the front of the shoulder
– Pain in the inner arm, inner elbow traveling down to the into the fourth and fifth fingers
– Numbness in the inside of the forearm, wrist, hand and fingers
– Difficulty reaching forward and up
– Pain in the upper back between the shoulder blades
– Pain when reaching behind the body
– Rounded shoulder posture
Activities that cause pectoralis minor pain and symptoms
– Lifting heavy objects
– Pushing things away from the body
– Push ups
– Lifting objects with arms straight in front of the body
– Working with your arms out in front of you (computer)
– Keeping your shoulders rolled forward or pulled up
– Carrying a heavy purse or backpack on one shoulder
– Hyperventilation, difficulty breathing
– Chronic cough
– Under-wire bras
– Large breasts
– Whiplash

The subclavius is a small triangular muscle, placed between the clavicle and the first rib. Along with the pectoralis major and pectoralis minor muscles, the subclavius muscle makes up the anterior wall of the axilla.

First rib about the junction of bone and cartilage.

The lower surface of the clavicle.

The subclavius depresses the shoulder, carrying it downward and forward. It draws the clavicle inferiorly as well as anteriorly. Also, protects the underlying brachial plexus and subclavian vessels from a broken clavicle (the most frequently broken long bone).

Pain and symptoms associated with the subclavius muscle

– Pain below the collarbone
– Pain in the upper arm
– Sends pain down the forearm into the thumb, forefinger, and middle finger
– A reliable indicator of subclavius muscle dysfunction is a pain on the outside of the upper arm that skips over the elbow then extends into the forearm. Pain can also extend to the thumb, index, and middle finger while skipping over the wrist.
– The muscle can tighten restricting circulation to the arm and hand causing tingling and numbness

Activities that cause subclavius pain and symptoms

– Lifting heavy objects
– Working with your arms out in front of you (computer, driving)
– Keeping your shoulders rolled forward
– Sleeping on your side with your arm above your head
– Broken clavicle

The serratus anterior is found more laterally in the chest and, forms the medial wall of the axilla.

Fleshy slips from the outer surface of upper 8 or 9 ribs.

The costal aspect of medial margin of the scapula.

The main action of the serratus anterior is to rotate the scapula, allowing the arm to be raised over 90 degrees. It also holds the scapula against the rib cage – this is particularly useful when upper limb reaches anteriorly (e.g punching).

Pain and symptoms associated with the Serratus anterior

Activities that cause serratus anterior pain and symptoms